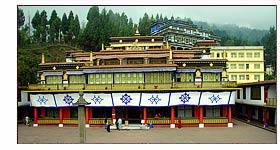 Rumtek 24 kms. from Gangtok in Sikkim, is the seat of his holiness, the XVIth Gyawla Karmapa, the head of the Karma Kagyu order of Tibetan Buddhism. The monastery Pemagyantse is 140 kms. West of Gangtok. The nearest airport to Gangtok is at Bagdogra (124 kms.) and the nearest railhead is at Siliguri (114 kms.) and New Jalpaiguri (126 kms.).

Rumtek is a famous monastery, all over the world, especially among the Tibetan Buddhists, and is situated near Gangtok, the capital of Sikkim. Originally called the Dharma Chakra Centre, it includes a beautiful shrine temple and a monastery for the monks. The 16th Karmapa built the monastery. The place got an existence in the Buddhist pilgrimage map, especially after Chinese habitation in Tibet and subsequent relocations of some Tibetan religious gurus to Sikkim.

The new monastery was completed in 1966, in four years time, the foundation stone of which was laid by the King of Sikkim. Thus, it is obvious that the Buddhists consider the place as highly pristine.

Rumtek
Location and configuration
Situated at a distance of 24 km from Gangtok, the capital of Sikkim, and at an altitude of 5800 ft, the Rumtek monastery is one of the best locations for a quite and peaceful atmosphere. The whole set is composed of the main shrine-temple, the monastery, a retreat centre, a monastic college (Shedra), a nuns' hostel, some stupas, a protectors shrine, other establishments for the community and other religious institutions.

(Sikkim is a northeastern state, with the second highest literacy rate in the country.)

Attractions
Besides the luxuriously sprawling green landscape, and a mild weather, smiling people, traditions that touch the conscience and the beautiful monastery, there is some important Buddhist institutions in the place. 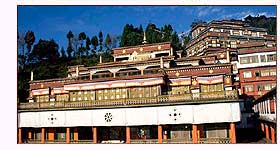 How to reach
Air - Bagdogra, in West Bengal is the nearest Airport, at a distance of 124 km. Helicopter Service: To cover the civil flights, there is daily helicopter service available which fly between Bagdogra and Gangtok.

Road - Sikkim is well connected through good concrete roads with Guwahati, Besides, regular bus service is available from Bagdogra, Darjeeling, Kalimpong and Calcutta.

N.B - Foreign tourists might need to obtain a permit, to visit Sikkim, which are easily available in major cities, including Siliguri.