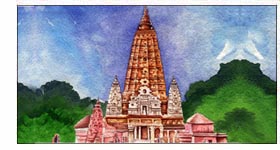 India and Nepal are the repositories of rich Buddhist heritage. Here, Buddhism came into being and grew up as the fourth largest religion in the world. Around 2,600 years ago, Prince Siddhartha Gautama was born to the Sakya ruler Shudhodhana in Lumbini forest, at present which is in Nepal. Thereon, he lived in indulgence as a prince in Kapilavastu. But sooner, the material pleasures waned for Siddhartha and the search to end the inner sorrows began. Sooner, he renounced his material pleasures as an ascetic, started meditating and fulfilled his objective of achieving enlightenment in Bodhgaya. Next, the Buddha continued his walk towards Sarnath near Varanasi. Here, he preached his first sermon to the first five followers. Here, he laid the foundation of Buddhism that rested in preaching and uplifted millions of followers with his enlightening sermons. He continued doing this for the rest of his life till his Mahaparinirvana in Kushinagar that relieved him from the cycles of life and death.

The above mentioned locations that uphold the Buddhist traditions are present in the neighbouring countries of India and Nepal and have become the major Buddhist Pilgrimagelocations worldwide. Seen with great regard by every Buddhist in the world, these pilgrimage places are suggested by the Buddha himself in his Mahaparinibbana Sutta, to gain merit of life on earth.

According to this sermon, every Buddhist follower should visit Lumbini in Nepal (birth), Bodhgaya (enlightenment), Sarnath (first-sermon) and Kushinagar (final mahaparinirvana) in India to learn to be like Buddha and practice the life based on middle path. In addition to the above mentioned sites, pilgrims can also visit the Sravasti where Buddha spent the largest amount of rainy retreat. During Buddha’s life, Sravasti is known to be his favoured site. Rajgir or Rajgriha was also the favourite place of Buddha and the Vulture peak here was the site for many of his sermons.

Sankassa is the place where Buddha descended to earth from Tusita heaven (after teaching his mother the Abhidhamma in heaven.) Vaishali is another privileged Buddhist destination known for many Buddha’s miracles. Here, he received a bowl of honey from a monkey.

A Buddhist pilgrimage through such religious sites not only takes a pilgrim closer to Buddha in life, but also inspires him to follow the footsteps of the master.