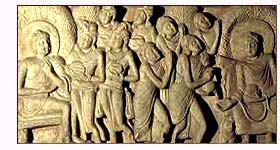 The ancient remains at this site, 150 kms southeast of Hyderabad, were discovered in 1926 by archaelogist AR Saraswati. Two major excavations were carried out before 1953, when it became known that the area would be flooded by Nagarjuna Sagar, the reservoir to be created by a massive hydroelectric project in 1960. A major six year excavation was undertaken to unearth the areas many Buddhist ruins, stupas, viharas (monastery complexs), chaityas (temples) and mandapams(pillared pavilions), as well as some outstanding examples of white marble depictions of the Buddhas life. The find were reassembled on Nagarjuna Konda, an island in the middle of the dam.

Nagarjunakonda was one the largest and most important Buddhist centres in South India from the second centuary BC until the third centuary AD. It was named after Acharya Nagarjuna, a renowned Buddhist scholar and philosopher, who had migrated here from Amaravati to propagate and spread the Buddha’s message of universal peach and brotherhood. The founder of Mahayana Buddhism, this revered monk governed the sangha for almost 60 years and the Madhyamika school he established attracted students from far and wide including Sri Lanka and China.

Nagarjunakonda may be named after Nagarjuna, the revered Buddhist monk who governed, the sangha (community of Buddhist priests) for nearly 60 years in the 2nd centuary AD. He found the Madhyamika school which studied and developed the teaching of Mahayana Buddhism.

NAGARJUNASAGAR DAM
A feeling of awe and insignificance overcomes you when you lay eyes upon the Nagarjunasagar Dam for the first time. Its sheer size and magnitude leaves you breathless and astounded. As the tallest and largest masonry dam in the world, it truly stands as one of the wonders of engineering excellence.

Stretching across the mighty river Krishna, the barrage also has another distinction to its credit-it has created one of the world’s largest man-make lake.

All the archeological findings and relics have been removed from here and Carefully preserved on an island in the middle of the lake Nagarjunakonda.

The seven hoods serpant is called NAGA MACHILINDA .He Protects the Lord Buddha when he is in Meditation. This Serpant carved in 4 Century AD by Ishwaku Kings.

Attractions
Ethipothala Water falls : The waterfalls are natural and the scenic beauty of the place is mesmerizing, the Chandravanka river flows down straight from a height of 70 ft, with hammering sounds and swift speed, and thrashes on to a lagoon which, serves as a crocodile breeding centre. So, you get another attraction for the time and price of one. The flow rushes in to a deep green forest.

Ethipothala is a popular picnic spot, not only for the reptiles, but also for the tourist folk.

Nagarjuna Konda museum : The museum houses all the important excavated items including relics by Buddha himself, stone images, Jataka tales encrypted panels and many other inscriptions.

Nagarjuna sagar waterfall : The dam, which caters to irrigation 10 lakh acres of land, is one of the largest man-made dams in the world. In the middle it contains the Nagarjuna Sagar Island which houses a museum.

Excursions
Anupu : Mere a 4 km away from Nagarjuna Sagar, Anupu became the virtual place to house the excavated pieces of artistic and architectural items, as transfer of the items was necessary to save them from immersion. Now, Anupu houses the university, the sacred Stupas, Viharas, monasteries and an altar.

Srisailam : Located at an altitude of 1500 m, Famous for the wildlife sanctuary, which houses the tiger reserve, there's also famous for Mallikarjuna Swamy, Brahmaramba, Uma Maheshwara and Saraswati temples. This temple is one of the Jyotiralingas and looks splendid as the ambience is quite perfect and the lush greens add to the beauty of the surroundings. The place has a "soothing the soul " effect and could serve as a perfect break for the always on the go types.

How to reach there :
Air : Nearest is the Hyderabad Airport.

Rail : Macherla is the nearest railhead, 20 km from Nagarjuna Sagar.

Road : Nagarjuna Sagar is located at 150 km from Hyderabad, well connected by Road.

Where to stay
Hyderabad, is a good option for stay and easy travel assistance can also be obtained from the city. The Taj Banjara, ITC Hotel Kaktiya Sheraton, The Viceroy, Hotel Sitara, The residency, Tulip Manohar, and Hotel Taj Krishna are good hotels.