About Nalanda
Built on a hallowed site where the Buddha had often stayed, Nalanda is one of the world's oldest living cities. The Buddhist University of Nalanda, once the most prestigious center of learning in Asia, was built here. The evocative ruins of its monasteries and temples still convey a vivid impression of the serene and ordered life of contemplation and learning that prevailed here. Nalanda is located 14 kms. from Rajgir.

Nalanda is located in the eastern Indian state of Bihar. It is well known as the ancient centre of learning which has the remains of the great Nalanda University and several monasteries and temples. Both Lord Buddha and Mahavira visited this place and it remained a renowned learning centre till 12th century. Kings of Gupta, Kushan and Palva dynasties were the chief patrons of the centre, who built several monasteries and temples. The famous Chinese traveller Hieun Tsang studied here and his documents provide details about the university.

Facts About the City :
State : Bihar, in east of India.
Significance : A Buddhist Site
Famous For: Being the largest and oldest university of ancient time.
Best time to visit - October to March

Tourist Attractions in Nalanda
Nalanda university - The university was established in the 5th century BC and was one of the oldest Universities of the world. The ruins of the university is spread over an area of 14 hectares land with a number of temples and monasteries built by the contemporary kings.

Nalanda Museum - It was established in 1971 and houses many ancient manuscripts and Buddhist statues. The museum also contains several objects like coins, pottery, inscriptions of Maurya and Gupta period.

Surya Mandir - This famous temple is dedicated to the Sun God and has a number of statues of Hindu and Buddhist deities.

Hieun Tsang Memorial Hall - The famous Chinese traveller who came to India in the 5th century AD and stayed in Nalanda for 12 years as a student and a teacher and studied the social and political conditions. The memorial hall was built in his memory.

How to reach Nalanda 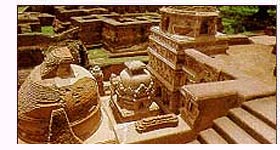 Air - Patna is the nearest airport which is around 90 kms away from the village. Regular flights connect Patna city with the major Indian cities like Delhi, Kolkata, Chennai, etc., which are further connected to major international destinations.

Rail - The nearest railway station is Bakhtiyarpur which is 38 kms from Nalanda. Gaya (65km) is the major railway point which is connected to all the major cities of India.

Excursions :
Rajgir - It is one of the most important Buddhist pilgrim site in India and is just 15 kms from Nalanda. Its temples and monasteries attract tourists from all over India.