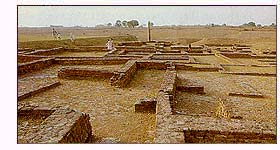 Another city that attracts a lots of Buddhist pilgrims each year, and considered to be the place where Lord Buddha passed his sixth and Ninth year after attaining enlightenment. Thus the place is special, and linked to many sermons that were delivered by Lord Buddha. The city finds distinct place as the centre of Kuru's Dynasty in Mahabharata and later as a wealthy city during Buddha's time.

The city is however in ruins due to the negligence of later rulers who had shifted their attention away from the place. Nevertheless, there are some old forts, stupas and sculptures that attract tourist attention, bearing the sign of an ancient civilized city.

The city also finds important insertion in the travelogues of Fa-Hien, the Chinese traveller. He described this place as one of the best cities of that time which proves that the city was once the nerve of activities in India. The feel of standing in a city that is linked to a period as ancient as that of Mahabharata, is really fascinating.

Attractions
The city is archaeologically very important due to its splendid and long history, right from the Mahabharata age. The old stupas, forts and monasteries are in their ruins in the city, on the bank of river Yamuna.

Location
Kaushambi is situated in the west of Allahabad in U.P. In the North of the district Pratapgarh, in the south Chitrakoot, In the east Allahabad, in the west Fatehpur districts are located. 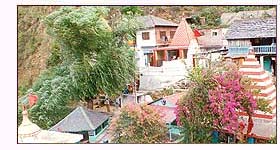 Sheetla Temple : The Sheetla is a goddes associated with power and the worshipping of the goddess is said to impart powers to the devotees. The temple, by river Ganga, is a famous Shktipeeth well revered by all Hindu Devotees. The ruins of the fort of Hindu King Jai Chand are still lying near the temple.

The place is also linked with famous saint Malookdas, the Ashrama and Samadhi are well attracting the visitors.

The Durga Devi temple : The Navaratri is the special festival of this temple in which lots of people gather during the festival. The temple houses a black stone idol of Goddess Durga and Lord Shiva, which is quite beautiful.

Prabhosha : Prabhosha or Prabhashgiri, Famous as the place where Lord Krishna died of an arrow, is considered as a holy place. The other important aspects of this place includes the Jain temple and the cave, which are both ancient and worth a visit.

Besides these attractions, there is the Kamasin Devi Temple, Kaushambi, and Shri Ram Temple of Bajha, The Ashoka pillar (in ruins) and the Ghositaram monastery, which are also good places to visit.

Excursions
Allahabad : At a distance of 60 km from Kaushambi, Allahabad is another important city of Uttar Pradesh both in the purview of Tourism and Hindu pilgrimages. The rivers Ganga and Yamuna meet in this city and is a holy place known as Sangam. However, the city is commercially also important. The tourist attractions include Allahabad temple, Patalpuri, Ashoka Pillar, Akshayavat, Jawahar Planeterium etc. 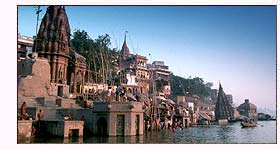 Varanasi : A holy Hindu Destination, famous for the ghats and the River Holy Ganga, this place is held high in Hindu sentiments. People from all over the world flock to the place to seek divinity and freeedom from the sins and the place is seen to be busy of "Yagyas" and "Pujas" and "Daan-Dakshina" round the year.

How to reach :
Air : There is an airport in the Allahabad region, called Bamrauli. However this could be a hectic journey. Better option could be the Varanasi airport.

Rail : Allahabad is a well-linked station in U.P railway map. There is no railhead at Kaushambi, probably due to sustenance of Buses.

Road : Regular buses run to Kaushambi from Allahabad. This is the most reliable source of travel, however, private taxis are also available.

Where to stay
Best place to stay is in Allahabad, not far from Kaushambi. Good hotels include Kanha Shyam and Yatrik.