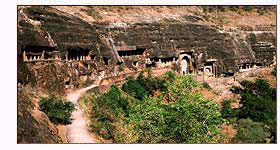 These 3rd-century caves are considered the finest masterpiece of Buddhist art and architecture. These historical manmade caves comprise of beautiful paintings on the walls and ceilings that depict the life of the Buddha. Visiting these caves is like travelling back to the past. At Ajanta, the paintings on the walls, illustrate the events in the life of Gautama Buddha.

These caves are believed to see the rise and spread of both the two sects of Buddhism, the Hinyana and the Mahayana, and enough examples of architecture are available still in the caves. The 30 caves, including the unfinished ones, seem to carry a distinct charm and represent the true faces of the flourishing Buddhist architecture, art, and obviously the religious influence at that period of time.
Ask For Ajanta Caves Travel Detail

The location
The caves are in the state of Marathas, Maharashtra, 100 kilometers from the city of Aurangabad. The caves are by the river Waghora, in the midst of the Sahyadri hills burried by thick forest all around. The Ajanta Caves were discovered by a British Captain, John Smith in 1819, while on a hunting expedition.

Attractions
The Ajanta caves are important mainly to see the fine line of transfer of the Hinyana and the Mahayana sect, as for the fact he Hianyana did not worship any god or goddess but they used stupas, and other rock forms to represent Buddha. Mahayana on the other hand, used idols of people they worship. Interestingly, the caves include both Chaitya (Prayer Halls) and monasteries and have both types of architecture and art besides paintings and scriptures, of the two sects Hinyana and Mahayana. Caves numbered 8,9, 10, 12, 13 and 15 are of the older sect, Hinayana. Mahayana related vcaves are numbered 1, 2, 16, 17, 19 and 26 where, 19 and 26 are Chaityas.
Ask For Ajanta Caves Travel Detail 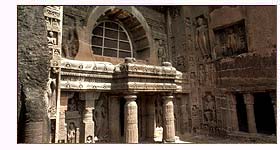 There are some unsurpassable paintings in the caves 1 and 2, mainly depicting the Jataka Tales. Buddha preaching in sitting position is the other common example of sculptures. Cave 10 is also quite attractive for its Buddha images and the depiction of Jataka tales. Cave 16 and 17 are monasteries full with images of Jataka tales, child and youth of Buddha, the Sravasti tales etc and are good examples of architecture. Caves 1,2,3,5,6,8, 14, 15,16 and 17 are Viharas or monasteries, 19 and 26 are prayer halls while caves 20 to 25 were used for residential purposes.

Though all the caves are interesting to watch and noteworthy, if one has only a little time in hand caves, remember 1,2,16,17, 19 and 26 are must see.

Ellora caves :Ellora has 34 caves with fantastic rock cut sculptures and is in the same district with that of Ajanta namely, Aurangabad. The caves are always rhymed with the Ajanta Caves for the architectural similarity and location. The cave is a symbol of representation of high tolerance of India from the ancient days, as well as pointing towards the common thread running through Hinduism, Buddhism and Jainism. The 12 Buddhist Caves depict Lord Buddha in various poses. The 17 Hindu Caves embody carvings of the Hindu Gods- Shiva, Vishnu, Durga, Parvati and animals. The 5 Jain caves include figures of the Jain saints. 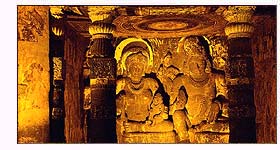 Nasik : The green belt city of Maharashtra is well known for the 12-Year Mahakumbh and the varieties of fruits produced here. The city is related with Ramayana and is a very fast growing industrial destination in India. Shirdi, Trmbakeshwar, Dudhsagar waterfalls, Bhandardara, Jawahar, etc.

How to reach
By Air : Aurangabad, 100 kms away is the nearest airport. Direct flights available from Delhi, Mumbai, Jaipur etc.

By Rail : Aurangabad is nearest railhead, Jalgaon, 59 km away, is good for catching swanky trains.

Where to stay
For accommodation, book your stay at