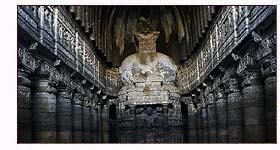 Junnar caves are also an important destination for the Buddhist pilgrims, not very far from Mumbai and Pune, these caves are situated in Aurangabad district, and are well known to the tourists, especially the Buddhist pilgrims around the world. There are many caves in the hill ranges, all-important in the archaeological point of view.

There are three groups of caves in the hills, the Tulija Lena, and the Ganesh lena being prominent. The place is surrounded by lush greens, which makes the place more attractive and a dear one among all Buddhist destinations.All of the Junnar caves were founded somewhere between 2nd Century BC and 3rd Century AD.
Ask For Junnar Caves Travel Detail
Location
The caves are located in Aurangabad district of Maharashtra, at a distance of 177 km from Mumbai.

Attractions
The Chaitya hall is very attractive and special. It has a circular dome ceiling, and lies within the Tulija lena Group of caves. The Chatya hall is spacious and different from most of the other Chaitya found in caves of India. The second groups of caves lie towards the Manmodi hills and are also quite important archaeologically. The caves are well preserved and special for the archaeologists, who visit to testify the sculptures and images in the caves.

The Ganesh Lena caves are also quite beautiful and attract a lot of tourist population. It also has a Vihara, known as Ganesh Lena, many small cells and chaityas. The cave no 6 which, also houses a chaitya is special and a must for any visitor.

Excursions
Ellora caves :Most famous caves, among the entire Buddhist cave in India, these have elaborated sculptures, finely finished images of Buddha among many other antique artistic pieces. These caves were built in between 350Ad and 750AD and are more important due to the amalgamation of Hindu, Buddhist and Jain faiths. All three types of caves are found in the place, which is a rare happening anywhere else.

Daulatabad : This city has a fort built by the Bhilam Raja of the Yadav Dynasty and is above a hill. The place has a mystic effect, and attracts many tourists due to its charm and vitality. 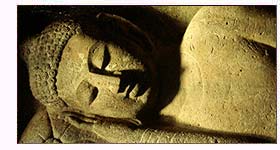 Ajanta caves :Unlike Ellora, these are predominantly Buddhist caves and represent a fine picture of the flourishing era of Buddhism in India. In a series of 29 caves, one can easily see the effects of Both sects of Buddhism, the Hinyana and the Mahayana, through the architecture and sculpture of these caves.