LIFE OF THE BUDDHA - 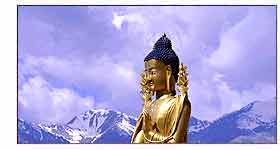 Once upon a time, over twenty five centuries ago, Kapilavastu, the capital of the Sakyas was in a festive mood. Mahamaya, the chief queen of King Suddhodana, had a dream in which a magnificent white elephant with a lotus in his trunk appeared and entered her side. The sixty four Brahman soothsayers who were invited to interpret the queen's dream prophesied that she would give birth to an illustrious son who would either be a world conqueror or a world renouncer.

Siddhartha Gautama, who was after enlightenment given the title of 'Buddha', was born a prince into the warrior caste (Shakya clan) in 563 BCE. On the birth of the child, named Siddhartha, the astrologers predicted to his father Suddhodana : "The child, on attaining manhood, will become either a universal monarch (Chakravarti), or abandoning house and home, will assume the role of a monk and become a Buddha, a perfectly enlightened soul, for the salvation of mankind". He was married at the age of 16. At the age of 29 years he left home and started wandering as a beggar and ascetic. After about six years he spent some time in Bodh Gaya. Sitting under the Bo or fig tree (Pipal, Ficus religiosa), meditating, he was tempted by the demon Mara with all the desires of the world. Resisting these temptations, he received enlightenment.

These sacred, holy and divine words define Buddhism, which is not just a religion, but a way of life. 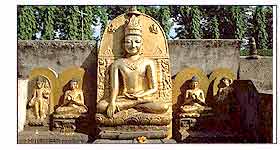 Walking in the Buddha's Footsteps
The sequence of the fifteen Buddhist places follows the lifecycle and the journeys performed by the Buddha as narrated in the Jatakas and the Tripitaka. Accordingly, the Buddha was born (563 BCE) in the garden of Lumbini(1), passed his first 29 years (563-533 BCE) in the royal palaces of Kapilavastu (2), followed by his march to several places and finally of Bodh Gaya (3), where he received enlightenment at the age of 35 (528 BCE), and Gaya (4) where he did arduous austerity. Then he proceeded to give his first preaching at Sarnath (5) in 528 BCE, After his success in making mass awakening and teaching in Sarnath he returned to Bodh Gaya. After visiting Rajagriha and Nalanda, he frequently visited Shravasti (6), where out of his passing 45 rainy seasons he stayed 24 times there, performed miracles and gave sermons. During the 6th (522 BCE) and 9th years (519 BCE) after enlightenment he stayed at Kaushambi. (7). While returning to Bodh Gaya, to fulfill his promise at the kind invitation of Bimbisara (ca. 543-491 BCE), he paid a visit to Rajagriha (8) together with a thousand monks of his new order, and gave his sermons there. On the request of his two chief disciples Sariputra (Pali: Sariputta) and Madgalyana (Pali: Mogallana), the Buddha visited Nalanda (9) several times and mostly stayed at Setthi Pavarika's mango grove. Thereafter, the Lord again visited Rajagriha and Nalanda and further proceeded to Vaishali. (10), the capital city of the Lichchhavis, where he gave his last detailed sermons and re-interpreted several of his teachings, and before his final march he stopped at the bank of the Ganga river in Patna (11), called today as Gautama Ghat. While making his final march he stayed a couple of nights at Kesariya (12), followed by his finalvisit to Kushinagar (13) where he passed away at the age of eighty (ca. 483 BCE). In the same year he descended from heaven at Sankisa
(14) and gave his final preaching there. Mathura (15) was also visited by the Buddha occasionally; it developed as the major centre of the Buddhist art and sculpture in the Maurya period.