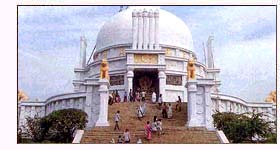 Situated by the river Daya, Dhauli hill is an important Buddhist tourist destination, near Bhubaneswar, for the ancient sculptures and the extraordinary art forms that have been found here. The hills are also famous for the Kalinga war that is famous for the transformation of Ashoka, into Buddhism.

Ashoka, one of the foremost followers and patrons of Buddhism, was converted to Buddhism at this place, the signs of which are available abundantly. The place has beautiful landscapes and a charm that can affect the mind in a splendid way, to change it spiritual, and hence soothe from many cares of life.

Location : Situated at a distance of 8 km from Bhubaneswar, the hills rise high near river Daya, in the Khurda district of Orissa.

Attractions
The peace pagoda remains at the top of the tourist choices for the delicate structure of the stupa and the monastery near it. The Saddharma Vihar monastery and the Shanti Stupa make the Buddhist pilgrim a special attraction, and a place to feel eternal peace of mind. Built by Buddha Sangha, in the early seventies, with the influence of Guruji Fuji, this stupa adds to the charm of an important Buddhist location.

Besides, there are many other sculptures to be seen in Dhauli. The main of the artifacts, ancient and archaeologically invaluable is the Ashokan edicts. These are specific due to the inscriptions, written on rock, some of them by Ashoka himself, and are rare pieces of art.

However, not only in Buddhism but also for Hinduism, Dhauili is a pilgrimage. The rock cut caves, small Hindu temples known to belong to the medieval age, A Shiva temple on top of hill are other attractions of this place. 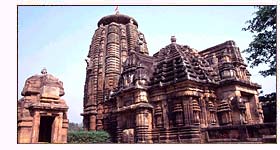 Bhubaneswar : The state capital Bhubaneswar is a famous Hindu pilgrimage, well known for its many temples. The famous of these temples is being the Linagaraja temple, the Mukteswar and the Parasurameswar. However, there are many other attractions in Bhubaneswar including the State museum, the Bindusagar tank, the Ekamra Garden and Haat, the BDA Nicco Park, Science Park and Info city etc.

Pipli : This place is famous for the applique work, the rare artistry, and has successfully continued by many generations and represents the richness of the culture that existed in the state in the medieval periods. The lifestyle and social structure of these applique workers are also very interesting to notice, since they show a close resemblance to the craftsmen of medieval Europe.

The Nandan Kanan National Park : Situated at a distance of 20 km from Bhubaneswar, this wildlife park is well known for white tiger breeding. Beautifully laid out landscapes, green surroundings and many rare animals and birds make the park an ideal place to pass some leisurely hours, sleeping under a tree or making friendship with the beasts.

How to reach :
Air : Bhubaneswar is the nearest airport, well connected to major cities of India.

Rail : Bhubaneswar is a major station near Dhauli and well connected on the railway network of India.

Road : Dhauli can be reached by Bus, or rented Taxi. Auto rickshaws run too, but as usual, fix the amount before riding.

Where to stay
In Bhubaneswar The Oberois and the Trident are good accommodation providers.