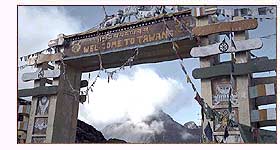 The Tawang monastery is one of the largest Buddhist monasteries in India. The 6th Dalai Lama was born here. The main attractions are the gigantic Io-metre gilded Buddha statue,a large collection of priceless manuscripts, books and tangkhas, which depict Buddha and the tutelary deities in different poses. Foreign visitors require a Restricted Area Permit (RAP) to enter Arunachal Pradesh to visit Tawang. Further details regarding RAP may be obtained from the nearest Indian Embassy or Indiatourism offices.

One more interesting monastery in India's basket, the Tawang monastery is a well known monastery in Northeastern part of India, and the effect of nearby Tibetan Buddhism is clearly visible here. The geographical region was a matter of major political dispute between India and China, after Indian independence in 1947.

The place is a beautifully landscaped hill station in the Arunachal Pradesh State in the northeastern part of India. The Gelukpa sect is predominantly found in the region, which closely resembles other Tibetan sects.

Location
In the map you will find Tawang inserted in the extended Arunachal Pradesh into an are in between Bhutan and Tibet. Geographically Tawang City is in the district with the same name, 180 km from Bomdilla, in Arunachal Pradesh.

Attractions
The Galden Namgyal Lhatse, or the Tawang monastery was founded by Merak Lama Lodre Gyamtso in the 1860-61. At an altitude of 10,000 ft, over a hilltop, the Tawang monastery is one of the best examples of religious architecture, especially those of Buddhism. 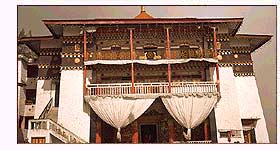 The entrance, itself is exotic, and houses the "Dung Gyur Mani", a pond, from where the water for the monastery is fetched. The "kakaling" or the entry gate is beautifully decorated with various paintings and the ceiling is painted with exotic paints related to the Buddhism folklore. Besides, the assembly hall is also very attractive, with a huge hall to serve the religious purposes of the monastery. The hall is beautifully decorated with silver caskets with thankas, particularly of goddess Sri Devi.

How to reach
Air - Nearest airport is in Tezpur, which is connected to major destinations of India. Tawang also has a heli-pad that caters to the helicopter services from various airports.

Rail - The nearest railway station is Bhalukpong, in Assam, at a distance of 298 km from Tawang.

Road - There are some good motorable roads from Itanagar via Bomdilla.