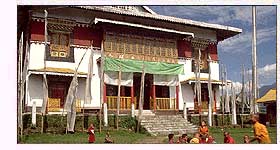 Rumtek 24 kms. from Gangtok in Sikkim, is the seat of his holiness, the XVIth Gyawla Karmapa, the head of the Karma Kagyu order of Tibetan Buddhism. The monastery Pemagyantse is 140 kms. West of Gangtok. The nearest airport to Gangtok is at Bagdogra (124 kms.) and the nearest railhead is at Siliguri (114 kms.) and New Jalpaiguri (126 kms.).

The town houses one of the oldest monasteries, with the same name, Pemayangtse, and has suddenly become a popular destination for the Buddhist pilgrims, especially the Tibetans. In Pemayangtse, one can realize that India is a much more diversified country than what is perceived. The landscapes are, in a way, quite vibrant. Adding to that are the colourful flags, the green surroundings and simple cultured people that make Pemayangtse a virtual heaven on earth. Everything that is attached with this place automatically creates a magical effect on the eyes, be it the paintings, or the sprawling green landscapes, or the pure oxygen that you take in, in every breath.

There are signs of the ancient capital of Sikkim, some of which have been restored with government funding, are really attractive and worth a definite visit while in Sikkim. And even if you stay at a hotel room, do open the windows to see the splendid orchids, butterflies and the cherry trees spread around.

Location
The monastery: The monastery: One of the oldest monasteries in Sikkim, it was built by Lhatsun Chempo, a revered Lama, and falls in the southwestern region of Sikkim. The place is 140 km, on road, from Gangtok. The monastery stands tall, at 6840 ft, and describes a story of religion and faith that runs through the blood of pure monks. The matter of fact is that it was built mainly for the purest of monks, but later on it started serving the whole community. The Kanchen Junga is at the background, think, it is the best place to be, especially during the sunrise and sunset hours.

Attraction
The monastery houses some of the ancient antique idols, scriptures and sculptures that should attract every spiritually motivated pilgrim to this sacred land. The top floor of the monastery is splendidly built, with magnificent sculptures and delicately decorated painting works. More than that, the monastery has its own style of expressing the religious values, with a charming look and fantastic artistic vibrations.

The most noticeable aspect one sees, in these monasteries is the similarity of these with the Tibetan monasteries, due to the fact that these are basically built and nurtured by Tibetans (after they relocated from Tibet).

At an altitude of more than 6000 ft, life becomes more interesting, and for the mind, it becomes more spiritual than on the sea levels.

Besides, there are the ruins of Rabdentse palace, the former capital of Sikkim (during 1814 AD), still in the excavation phase, successfully representing the charm and richness of culture that once existed in this land. 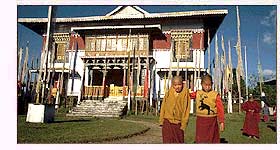 How to reach
Air - Bagdogra (in West Bengal) is the nearest airport. Regular flights and helicopter services are available to Gangtok, from Bagdogra.
Rail - Siliguri (114 km) is the nearest station, but New Jalpaiguri (125 km) could be a better option.
Road - The gateway of Pemayangtse is through Pelling. Good motorable roads connect Pelling to Pemayangtse, and also to Gangtok, the state capital. The distance of Pemayangtse from Gangtok, through Rabongia is nearly 120 km.

N.B- Foreign tourists might need to obtain a permit, to visit Sikkim, which are easily available in major cities, including Siliguri.