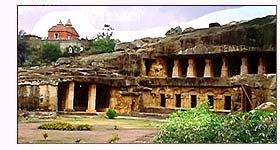 About Udaigiri
Udaigiri is an important Buddhist pilgrimage in the state of Orissa, special due to its caves, which house some of the most antique and architecturally important sculptures of Buddhist origins. Not very far from Bhubaneswar, the place was a flourishing learning centre of Buddhism, and still represents its rich history through the ruins of the ancient monasteries, stupas and other Buddhist items found in the place. Besides, this place is also considered holy by the Jains.

The main sculptures of Udaigiri that has been excavated include some Buddha sculptures in the meditating position while some Bodhisattva figures has also been found.

The hill behind the excavated places serves as perfect background and makes the site more interesting. The hill is full of inscriptions and rock cut sculptures which, also attracts lots of tourists.

Location :
The city is in the 20 km to the Northeast of Cuttack and is 100 km from Bhubaneswar. 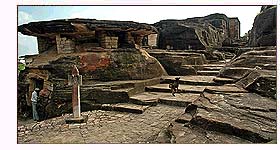 Tourist attractions :
The ancient city is full of ruins of the Buddhist origin, some of them sculptured out of hilly rocks, is still to be revealed fully to the tourists since excavations are not completed. However, the presence of the biggest Buddhist complex, which is unusually made of brick, makes the place an interesting place both for archaeologists and pilgrims.

Cave 1 is known as Rani Gumpha and houses some beautiful sculptures of elephants, monkeys, aword fights and abduction of women, all of which are linked with King Kharvela. Though not very important, the sculptures represent rich artistic expressions and good dose to the history lovers.

Though some of the caves are completely in ruins, cave 3 and 4 serve well to the tourists for its majestic sculptures and architectural simplicity. These are , interestingly, double storeyed and house some beautiful sculptures such as that of a lion and its prey, elephants with snakes around them, and some unusual winged animals on top of some pillars.

Excursions :
Ratnagiri : Ratnagiri is another tourist destination near Udaigiri, especially for the Buddhist pilgrims as the place has been found to have connections with Lord Buddha and some of his famous disciples. Famous for it's two monasteries, which belong to 6th and 12th century. The large carvings of Buddha, big stupas and other ancient sculptures are also worth a visit.

Cuttack : Formerly the capital of Orissa, presently the commercial capital, Cuttack is the birthplace of Netaji and a recently popularized city in the international map of tourism. The city has many good temples and some really good shopping destinations for the shopping -freaks. The places to visit include the stone revetment in the bank of Mahanadi, Barabati fort, Qadam-e-rasool, Dhavaleshwar, etc.

Kendra para : The famous Baldev Jeu temple, the city is also known as Tulsi Khshetra. The "Rath-Yatra" passes through this city, and is a great occasion to be here, to see the fanfare and the charm of India, in Orissa. 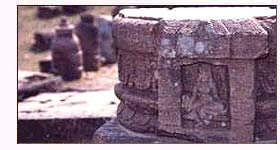 Reaching there :
Air : Bhubaneswar, the capital of Orissa, is the nearest Airport.

Road : well connected to the cities such as Bhubaneswar etc through the road network. However, private taxis are more favourable than the buses.

Where to stay :
The base could be either Cuttack or Bhubaneswar. In Cuttack one can stay at Hotel Akbari Continental (3 star), while in Bhubaneswar well known hotels include the Trident and the Oberois.


N.B- There is another place with the same name in Madhya Pradesh, more famous for Hindu and Jain architectures.