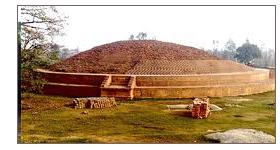 Assandh
Located in, Assandh has more than 2000-year-old Buddhist Stupa in India. Elevated on an earthen platform, the brick stupa is 25-metre high and 75 metre wide. Erected by the Kushans, Assandh Stupa can be considered as the tallest in India.
Ask For Haryana Tour


Chaneti Stupa
Situated in Yamuna Nagar, Chaneti Stupa is a round mound of 8 meters in height. According to a learned Chinese pilgrim, Hiuen Tsang, the stupa was built by Buddhist Emperor Ashoka to spread the religion’s reach.

Kurukshetra
Though it is believed that the traces of Buddha’s footprints are Bihar and Uttar Pradesh, recent excavations have revealed that Haryana also hosts many Buddhist heritage sites. One such city is Kurukshetra where the upholder of peace - Lord Buddha himself came and preached peace and compassion to the people in the past.