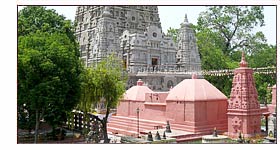 A place where Lord Buddha left his foot steps nearly 2500 years ago while travelling in the quest of enlightenment, situated by the river Phalgu, Bodhgaya is one of the most important and sacred Buddhist pilgrimage center in the world. It was here under a banyan tree, the Bodhi Tree, Gautama attained supreme knowledge to become Buddha,the Enlightened One. The serenity of the atmosphere remains in the subconscious soul of any visitor who takes the village as a pilgrimage that the Lord himself had chosen for meditation.

There is a magnificent Mahabodhi temple and the Tree from the original sapling still stands in the temple premises. The temple is an architectural amalgamation of many centuries, cultures and heritages. While its architecture has a distinct stamp of the Gupta era, it has later ages inscriptions describing visits of pilgrims from Sri Lanka, Myanmar and China between 7th and 10th century AD. It is perhaps still the same temple Hieuen Tsang visited in 7th century.
Ask For Bodhgaya Travel Detail

Location
At a distance of 17 kms from Gaya, this highly revered pilgrimage is in Bihar. From the capital, Patna, it is 105 km away.

Attractions
Mahabodhi temple - The temple is an immense attraction to the Buddhists, and stands near the Maha Bodhi tree under which Tathagat, or Gautama attained enlightenment. The total height of the temple is 170 ft. Its basement is 48 square feet and it rises in the form of a slender Pyramid till it reaches its neck, which is cylindrical in shape. It is a must visit not only due to its importance but also for the architecture and the art objects. The Shiva Lingam inside the temple was installed on 9th century beginning, is a splendid piece of sculpture.

Mahabodhi Tree - The tree is considered holy since Lord Buddha attained enlightenment under it , it is probably the fifth succession of the original tree. Anyone, who likes an ambience of serenity, would understand this place's surroundings to be perfectly weathered for meditation.

Vajrasana - The stone platform, where Lord Buddha sat in meditation while he attained enlightenment is known as Vajrasana. The place is restricted for any tourist activity on it; however, even the sight doesn't fail to excite the spirituality of the watcher. 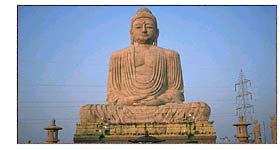 Rajgir - Rajgir (80 kms) was the capital of the mighty Magadhas, described in Mahabharata, during the 6th century BC. It is one of the most important tourist places in India. Being located in a valley, Rajgir is a very scenic place. The attractions include the Ajatshatru fort, Shanti Stupa, Venu van, Karanda tank, Sonbhandar caves, Bhimbisar jail, Gridhkuta and hot water springs and the forestry. There is an aerial ropeway for adding charm to the tour.

Nalanda - 96 kms from Bodhgaya, The place where an ancient university, famous all over the world existed, which is 62 km from Bodhgaya and 90 km south of Patna. In this first residential international university of the world, 2,000 teachers and 10,000 monks students from all over the Buddhist world lived and studied here. Nalanda is a place to understand the cultural richness of India during 5th century AD. The excavations have revealed some very interesting facts regarding the ancient university, and the artifacts obtained are naturally a must for every visitor.

Gaya - Gaya is a Hindu pilgrimage place. Gaya is 102 ms rom Patna and 17 kms from Bodhagaya Bihar. Gaya is one of the most sacred Hindu destinations. The Vishnu temple is the central pilgrimage centre and people believe it has been constructed on the footprints of Lord Vishnu. Hindus believe that if a person's last rites are performed in Gaya, the soul attains Moksha, so thousands come here to offer the last rites and funerary offerings for their ancestors, every year. Main attraction is Vishnupad temple.
Ask For Bodhgaya Travel Detail

How to reach
Air - The nearest airport is at Gaya 7 Kms. Various National and international carriers brings passenger to this destination.

Where to stay ( Hotels -|- Temples/Monasteries )