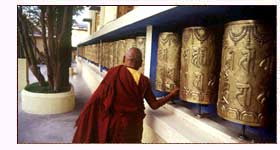 Dharamsala (Mcleodgani) is in Kangra District of the state of Himachal Pradesh. This hill station with a magnificent view of the Dhauladhar range of the Himalayas is the seat of his holiness, the Dalai Lama.

About Dharamshala
Dharamshala is also renowned for its beauty, elegance and charm that it expresses through the natural scenarios and the mystic ambience of religious associations. It the centre of preaching of the Tibetan religious Guru and Nobel peace prizewinner, the Dalai Lama.
Ask For Dharamshala Travel Detail

Dharamshala (Mcleodganj) is in Kangra District of the state of Himachal Pradesh. This hill station with a magnificent view of the Dhauladhar range of the Himalayas is the seat of his holiness, the Dalai Lama. It has obtained its name from the guesthouse for the religious travelers, called Dharamshala in Hindi. The town is divided into two parts, the Upper Dharamshala and the Lower Dharamshala (main town). The upper Dharamshala or McLeod Ganj from Dharamshala by road, is 10 kilometers.

Location
Dharamshal, the small beautiful town of Himachal Pradesh falls in the Kngra valley, at a distance of 185 km from Shimla, the capital of Himachal Pradesh. Attractions
Himachal Pradesh is one of the most beautiful states in Northern India, Dharamshala is like a small piece of diamond, which multiplies its beauty manifold. The landscape is splendid, with green surroundings, swift rivers, and the mighty hill ranges, the small city is a perfect resting destination after some rush hours of journey. If one goes to Dharamshala the main attractions would be as follows.

The Kangara Art Museum - This museum houses some rare artifacts, miniature paintings and other cultural objects representing the richness of the past of this small town. Some of these belong to the 5th century, and the artifacts are quite well preserved.

The library of Tibetan arts works and archives is also a good place to visit, especially for the Scholars and the enthusiasts of ancient art and literature. 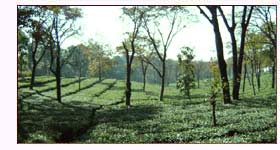 Mcleodganj in the suburbs of the upper Dharamshala, houses the residence of Dalai Lama, who heads the prayers while at residence and is considered one of the key leaders of Tibet. He has been operating the Government in Exile since his disappearance from Tibet. He has also won the Nobel Peace prize, and is a noteworthy Buddhist spiritual leader.

Palampur - Green is great, as well as the place, coloured green with the tea estates scattered around in the town, making the place a great green picture of life. The place is famous for many interesting places such as Bundelmata temple, Bir, Billing and Al Hilal, the last one being a famous hideout place for Maharaja Ranjit Singh.

How to reach
Air - Kangra Gaggal Dharmashala airport is the nearest, at a distance of 12 km.

Rail - Pathankot is the nearest railhead in broad gauge route, however Kangra station is in the narrow gauge map, only 18 km from Dharamshala.

Road - The national highways numbered 1 and 1A connect Dhramshala to Pathankot and Jalandhar, thus obviously the roads are quite good.

Where to stay
Low and mid-bidget hotels are available in Dharmashala.