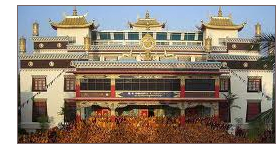 Ashokan Edicts - Siddhapura
Some of the precious inscriptions on rock erected by Emperor Ashoka adorn the Buddhist heritage of Karnataka. The edicts in Siddhapura depict Ashoka as a lay worshipper, zealous about Buddhism after visiting Samgha in Brahmi script and Prakrit language.

Chitradurga
Brahmagiri’s Ishila, one of his provincial capitals where rock edicts dated 3rd century BC were discovered. These inscriptions are also an important from the viewpoint of assimilation of Buddhist culture and language of Brahmi and Prakrit in regional Kannada culture. Jatinga Rameshvara and Siddhapura also comprise the heritage of Ashokan edicts in the district.

Maski
Maski of Raichur District hosts a minor rock edict of Emperor Ashoka, discovered by C. Beadon in 1915. This edict’s uniqueness lies in its inscription which contains the name of Ashoka instead of the earlier edicts that referred him as Piyadasi, (Beloved of the Gods who regards everyone amiably).

Koppala
Gavimath in Koppala hosts the legible Ashokan edict in the region whereas Palkigundu’s remains are hard to decipher. Here also, Emperor didn’t use his name and referred himself as Devanama Piyadasi – Beloved of all gods. The inscription adds on to the purpose of the announcement by making people realize that anyone can be enthusiastic about Buddhism.

Dambal
A major center of Buddhism till 12th century, Dambal has an old Buddhist temple with a 10th century inscription. The temple is devoted to Buddhist Goddess Tara, and in past served to Buddhist monks as a Vihara. The inscription dated 1095 AD reinstates this fact. A Buddhist centre also flourished in Dambal during 12th century, the era when Hinduism was at its peak.

Mundgod
Mundgod in North Karnataka is a site offering a glimpse of Tibetan settlements, multi-coloured stupas and painted prayer halls in South. Currently, the complex houses 9 camps with two monasteries and a nunnery.

Kanaganahalli
Kanaganahalli is an important Buddhist site where an ancient Buddhist Mahastupa, brick built structures of Chaityagriha, votive stupas, Buddha padas, sculptured panels of Jataka stories and life of Lord Buddha were excavated during 1994 to 1998. Ruined remnants of a monastic complex also belong to Kanganahalli.

Also, 50 inscriptions were discovered from this glorious site, including an important excavation of Emperor Ashoka’s sculpture.