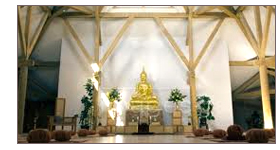 Interpreted as the abode of immortals in Pali, Amaravathi or Dhanyakataka/Dharanikota consists of the Great Buddhist Stupa and 2000 year old relics of Buddhist settlement built under the reign of Emperor Ashoka. Also known as the Mahastupa and Deepaladinne - the mound of lamps, this 27 m high Great Buddhist Stupa is the biggest one in India. Made of brick with a circular vedika, the revered stupa is adorned with 95 ft high platforms, protruding in four cardinal directions.

Nagarjunakonda
Named after Nagarjuna, a master of Mahayana Buddhism in South India, the historical hill called Nagarjunakonda served as the hub of Buddhists. One of India’s richest Buddhist sites, Nagarjunakonda hosts the relics of many Buddhist universities and monasteries which attracted students from China, Gandhara, Bengal and Sri Lanka in ancient times. Presently what constitutes of Nagarjunakonda is a restored Buddhist site on an island which symbolizes a lost civilization that flourished thousand years ago.

Excavations till date have yielded 30 Buddhist monasteries, throwing a light on the strong foothold of Buddhism in the city. Others include Maha Chaitya, Viharas, Buddha statues, relics, stone images, Jataka tales encrypted panels and other items of Buddhist origin.

Anupa
Surrounded by the recently excavated remains of the Buddhist heritage including a Buddhist University, Amphitheatre, Viharas and Chaityas; Anupa forms the part of Buddhist circuit in Andhra Pradesh. 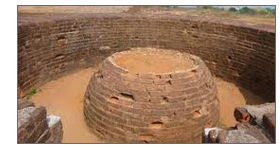 Thotlakonda
Located on the top of the Mangamaripeta Hill, Thotlakonda served as an important information exchange spot for Buddhist culture between India, Sri Lanka and other parts of south-east Asia. About 16 km from the port city of Vishakhapatnam, the site hosts a Buddhist Complex featuring a Hinayana monastery, Mahastupa, 16 votive stupas, a stone pillared congregation hall, apsidal chaitya grihas and10 viharas. The excavations, over a period of 5 years, have revealed other important Buddhist remains including 12 Brahmi inscriptions, sculpted panels, miniature stupa models in stone and Buddha padukas - foot imprints with ashthamangal symbols. At present, the statue of meditating Buddha adorns the Buddhist site - Thotlakonda.

A piece of bone stored in a pot believed to be the mortal remains of Lord Buddha was discovered during excavations. Counted amongst one of the oldest and most revered Buddhist sites in Asia, Bavikonda traces the history of the religion back in time that once existed in the southern part of India.

Excavations of Bhattiprolu were undertaken by Alexander Rea in 19th century where three mounds featuring three inscribed stone relic caskets, relics of Buddha and jewels were discovered. The significant discovery of the site includes the Mahachaitya Stupa, crystal relic casket and several images of Buddha.

Sankaram
Sankaram, an important Buddhist site features the ancient relics of rock stupas covered with bricks, rock-cut caves, early historic pottery, brick-built structural edifices and Satavahana coins that date back to the 1st century AD. Close to Sankaram, another heritage site of Bojjannakonda is located where one can experience close connection with the life of Buddha through rock carvings on the façade of the caves.

Undawalli Caves
Undawalli Caves near Vijaywada are the one of the finest rock cut architecture caves in India. Carved out of solid sandstone on a hillside, the main cave section includes primitive rock monastery cells along with other caves featuring deities like Vishnu, Shiva and Brahma. The first floor of this relic still retains style of Buddhist vihara along with some Buddhist sculptures. 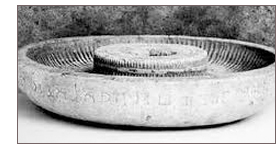 Ghantasala
Ghantasala town serves as a rare and important center for Buddhist sculptures. 19th Century excavations of the site unfurled carved limestone columns and pillared halls associated with Buddhist monastic establishments. Along with this, the ruined Maha Chaitya Stupa with circumference of 112 feet and 23 feet high here consists of a solid brick cube in the centre, inscribed with 12 zodiac constellations. At present, the site has its own museum containing important Buddhist stupa and sculptural slabs found during the recent excavations. Adurru near Ghantasala also hosts a Mahastupa measuring 17 feet in diameter.

Gudiwada
Gudiwada town near Vijaywada also hosts relics based on Buddhist and Jain beliefs. Around 99 low mounds with remnants of Buddhist Stupas were excavated here.

Salihundam
Salihundam, the village is famous as a Buddhist remnant site featuring a number of Buddhist stupas and a huge monastery complex. Located on a hillock amidst scenic surroundings, Salihundam has the treasures of a Chaityagriha, structural temples and a number of sculptures showcasing the relics of three different Buddhism phases - Theravada, Mahayana and Vajrayana.

Nelakondapalle
Nelakondapalle in Khammam district is a remnant example Buddhist site belonging to Ikshvakus -Vishnukundin times. The excavations brought to light a number of huge standing Buddha images, Vishnukundin coins, Vlharas, mahachaitya, votive stupas, terracotta figurines, early historic pottery and bronze image of Buddha. This site probably served as a link between coastal and Telangana areas for traders and also to Buddhist monks. Basing on the archaeological evidences, the site belongs to the period between 3rd and 5th AD.

Dantapuram
The Buddhist connection with Dantapuram site is evident through the extracted excavations. Often referred to as Dhantavaktruni Kota in Buddhist literature, the site has revealed four brick votive stupas along with various antiquities like beads of Terracotta, semi precious stone beads, ornaments and different coloured potteries. Evidences even showcase that the site served as a cultural and religious exchange zone for Buddhism.

Pavuralakonda
The excavation relics at Pavuralakonda have exposed the proof of hosting a major ancient Buddhist settlement and human habitation. Sixteen rock-cut cisterns used for rainwater preservation also adorn the hillock and provide a panoramic view of the coastline.

Phanigiri
Located on the hill top, the recently excavated Phanigiri village showcases a massive Buddhist complex featuring a large Stupa, two apsidal halls with stupas in it, three Viharas as dwelling of monks. The remains of this complex stand on the top of a table hill shaped as snake hood, through which the site got its name - Phanigiri.

Gopalapatnam
Recently excavated relics of Gopalapatnam present the entire Buddhist village which dwelled on the Budhikonda Hill range. The entire village is dotted with stone veneered, brick built and votive stupas, viharas and other Buddhist imprints.

Bojjannakonda
Bojjannakonda near Vishakhapatnam is a 2000 year old Buddhist heritage spot famous for Rock cut Lord Buddha Statue. Also, the site is known to have yielded ancient statues of Buddha in various postures, enchanting stupas and other Buddhism related structures like meeting halls. Even different varieties of bricks used in the construction during the Buddhist period were discovered from the site.

Vizianagaram
The black hill - Durga konda near Ramatheertham in Vizianagaram features remains of a Buddhist Monastic complex and Rock-cut caves.