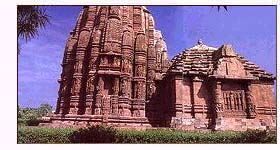 About Lalitagiri
Lalitagiri is also a well-known tourist pilgrimage, especially for Buddhism, and draws hoards of pilgrims each year. It has a famous 1st century Buddhist complex and some of the best sculptures of that age.

The place itself is like an ancient village, with greenery and free spaces, mild forests and breezes blowing all the time. The ancient stupas, sculptures on them and the caves give it a look that fairly resembles to that ancient age.
Ask For Lalitgiri Travel Detail
Location
Lalitagiri is situated at a distance of 90 km from Bhubaneswar, in the state of Orissa. Geographically, it is pread between 20 Degree North latitude and 86 Degree East longitude.

Attractions
The 1st century Complex is definitely a big pull for the pilgrims as well as archaeologists. The sculptures are also quite interesting, especially when it's known that these belong to the 1st century. There are several stupas in the hill range, and the Chaitya hills are also a major attraction for the tourists.

There is also a giant stupa on the top of the Pushpagiri hill, of Mahavira, that is considered a brilliant piece of Buddhist architecture. There are relics of Buddha sculptured on the cascades, which are interesting to learn the culture of that age, is another draw.

The recent excavations have made the place more popular due to the findings of many ancient sculptures and other items, which are important in archaeological sense. The structures are linked, by the arcgaologists, to the Gandhrva schoola of art.

Excursions
Bhubaneswar : Bhubaneswar, the capital of Orissa is mere a 90 km away from Lalitagiri but a reasonably good place to visit as the road communication is quite good. It's a renowned Hindu pilgrimage with as many as 500 temples, architecturally brilliant and excellent for studying the architectural styles of 3rd Century. The Lingaraja temple, Kalinga Buddha Vihara, the Jaggannatha temple and the Mukteshwar temple is also a big attraction for the tourists. The place is also a shopping destination in Orissa.

The Ratnagiri and Udayagiri hills are nearby and offer an excellent addition for the Buddhist pilgrims to go through some other important ancient Buddhist remains and taste the ancient art sculptures.
Ask For Lalitgiri Travel Detail 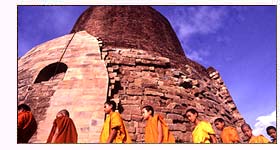 Langudi : The recent excavations, revealing some interesting facts, in the Langudi hills that are worth a watch with utmost interest. There are many Stupas cut out from rock grabbing attention, the Buddha in Samadhi-mudra, Sculpture of Goddess Tara, the harmonic umbrella, the Cylin dome etc have revealed a new chapter in the Buddhist tourist destinations.

How to reach
Air : Bhubaneswar is the nearest airport. Well connected to Lalitagiri by bus.

Road : Lalitagiri is well connected with Bhubaneswar, and other cities through a good road-network.

Where to stay
Based at Bhubaneswar, the Lalitagiri could be taken as an excursion. One can stay at the Trident or the Oberois.