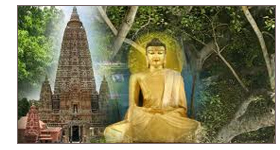 Everything that is said in the glory of Bodhgaya falls short because of the reverie and the sacredness associated with the site. Located in the East Bihar, it was the place where Buddha in pursuit of the real meaning of life beyond any pain and suffering finally gained enlightenment under the Banyan Tree - now known and revered as Bodhi Tree.

A UNESCO world heritage site, Bodhgaya forms an inevitable part of Buddhist Circuit in India visited by the world. Even today it attracts thousands of visitors from all over the world.
Ask For Bihar Tour

Pragbodhi
Near Bodhgaya, Pragbodhi is the site where Buddha practiced austerities in order to find the awakening and the solution of life from pain and suffering. Located on the top of mountain, the site has several ancient stupas along with a small Tibetan Buddhist temple.

Barabar Caves
The oldest surviving rock cut caves in India; Barabar is located on the twin hills of Barabar and Nagarjuni. Carved in the Mauryan times, the caves have the larger Buddhist Chaitya including stupa emblems, elephant engravings, circular vaulted chambers with rectangular mandapa and a curved architrave.

Champanagar
Champanagar in the Bhagalpur district is the place visited by Lord Buddha many times. Also, the site witnessed some of the important discourses and sermons from Lord Buddha including Kandaraka Sutta, Sonadanda Sutta, etc.

One of the prime attractions of Champanagar is a tank known as Gaggara's Lotus Lake where lotuses bloom. On the banks of the lake is a grove of huge Champaka trees, which is believed to be the most favored spot of Buddha. Another lake, Sarovana Talab yielded a number of Buddha statues in 1900’s - the time when the lake was cleaned.

Dona
There is a legend behind Dona Stupa. After Buddha’s Parinirvana and cremation, a dispute ensued between the four Buddha disciples over the division of his mortal ashes. Eventually the task of fair division of the ashes was ensued to a Brahmin named Dona. He divided the ashes into eight equal halves for the claimants. The disciples, satisfied by his fairness presented him the vessel in which the ashes had been stored. The stupa at Dona enshrines the very same holy vessel which is now reduced to a grassy mound. A Hindu temple is built over the mound where the idol of goddess Tara is worshipped.

Ghosrawan
Once a very large and elaborate Buddhist Vihara, Ghosrawan presently contains the relics of the same. To enshrine the presence of Lord Buddha in the area, the 10 feet statue black stone statue of meditating Buddha is carved. Few kilometers towards the south Ghosrawan is Tetravan, where a temple showcases an extensive collection of Buddhas and Bodhisattvas. 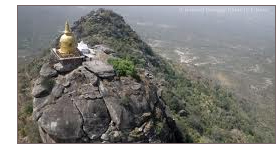 Gurpa
Gurpa enshrines the Mahakassapa, the successor of Lord Buddha who is still believed to be waiting for the arrival of Maitreya, the future Buddha. When Mahakassapa, the successor of Lord Buddha himself realised that his life was nearing its end, he moved towards Kukkutapadagiri, a mountain resort close to his heart. During the passage, the group experienced various obstacles like falling of rocks that hindered the journey further. But nothing stopped him from his ultimate journey of life. He struck all these rocks with the accompanying group which paved way for his journey. After he reached the hill top, the hollow space was formed in the rocks where he indulged himself into the deep meditation. Followed by this, the rock crater closed around him. This sacred mountain where Mahakassapa is enshrined is known as Gurpa. According to scriptures, the future Buddha or Maitreya will first visit Kukkutapadagiri, raise Mahakassapa out of mountain; get Buddha’s robe from him and then begin his journey of dispensation.

Hajipur
A venue for many of Lord Buddha’s discourses, Hajipur is a prominent Buddhist site as it enshrines the mortal remains of Ananda, the very wise and closest disciple of Lord Buddha. He also served as the attendant of Buddha for 20 years and played a major role in recording his teachings after his

Indasala Cave
The beautiful caves at Indasala in Bihar witnessed a number of sermons and discourses from Lord Buddha himself including Sakkapanha Sutta and Dhammapada.

Jethian
After achieving enlightenment, as a gesture of keeping the promise meet King Bimbasara, Gautama Buddha, accompanied by the large group of monks visited Rajgir. Hearing the news of Buddha visiting him, Bimbasara, his wife along with royal entourage came out of the city and welcomed the Buddha. The place where both the great men met is the present day Jethian, the then village of Lativana. The place where Buddha stayed in Jethian had been marked as a Stupa, built over the Supatittha Cetiya, which is now reduced to a large mound. Besides this, a large and impressive statue of the Buddha adorns the site.

Kesaria Stupa
The biggest Buddhist stupa at Kesariya has been deeply associated with Lord Buddha once stayed there and preached the Sutta on the same name Kalamas of Kesaputta to the natives of the area.

According to legends, the time when Buddha got the realization of his Parinirvana and he left Vaishali on his way to Kushinagar, a large group of followers moved behind him and refused to leave him. When the crowd reached the then Kesaputta, Buddha urged them to return back to their homes and after many attempts, finally they agreed. To console gloomy crowd, he gave them his begging bowl. To commemorate this place, a stupa was built by Emperor Ashoka.

Nalanda
The world’s first residential university, Nalanda was one of the first great centers of learning in recorded history. The university in its glorious years attracted scholars and students from far away China, Greece, and Persia. Around 2,000 teachers and 10,000 monk students from all over the Buddhist world lived and studied here. Buddha himself visited the university many times. At present, ruins of Nalanda are spread over an area of 14 hectare along with small stupas statues of Lord Buddha. Ongoing excavations in the area have also unveiled elaborate Buddhist structures in Nalanda Complex. 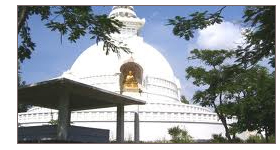 The Jivekarmavan monastery at Rajgir was the favorite residence for Buddha. The teachings of Lord Buddha were penned down at Rajgir and it was also the venue for the first Buddhist Council. Such is the reverie of Rajgir which is now a prime Buddhist Pilgrim spot.

Vaishali
Once the favourite resorts of Gautama Buddha, Vaishali witnessed the last sermon and the announcement of Parinirvana. In Vaishali only, several monkeys offered Lord Buddha the bowl of honey. Notable Buddhist sites in Vaishali include Stupa of Buddha’s ashes built by Lichchvis and Ananda Stupa, the famous lion pillar by Emperor Ashoka.

Kurkihar
Kurkihar houses relics of Buddhist Vihara or monastery of ancient times which is now reduced to a mound. The excavations in the Buddhist site in 1930 revealed 148 finest bronze artifacts of Buddhas, Bodhisattvas, bells, stupas and ritual objects.

Lauriya Nandangarh
The small village of Lauriya is known for its 26 metre huge stupa called Nandangarh which enshrines the ashes of Lord Buddha. It was built by Emperor Ashoka.

Patna (Patliputra)
At the time of Buddha, the city of Patna was known as Pataliputra. One of the world's oldest capital cities with a continuous history of many centuries, Patna is a base point to explore the Buddhist footprints in the state.

Vikramsila University (Bhagalpur)
Vikramsila University was one of important Buddhist centers of learning in India during the Pala’s rule, along with Nalanda University. Established by King Dharmapala during 8th or early 9th Century A.D in response to a supposed decline in the quality of scholarship at Nalanda, Vikramsila in its golden period had more than one hundred teachers and about one thousand students. Presently ruins of Vikramsila University can be explored in Bhagalpur region of Bihar.