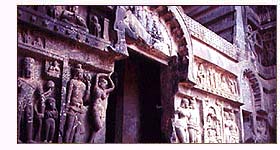 The Karla Caves are the other important caves in the Buddhist pilgrimage destinations, visited by many devotees every year. The place is more known due to the Chaitya larget cave temples in India ,intricate sculptures and pillars with artistic architecture. The hill caves are tough to get in, as usual, and presents another chapter of spread of Buddhism and its flourishing days during the golden era of Buddhism. These caves were built in the 2nd century BC, but some of the architecture is still intact and preserved in scientific manner, which makes detailed research of the art forms possible for the archaeologists.

One of the pillars of the Karla caves has four lions at the top. This design has been adopted as the national emblem of India.
Ask For Karla Caves Travel Detail
Location
These caves are easily reachable by road, lie near the Puna-Mumbai road, at a distance of 20 km from Lonavla, a hill station and 40 km from Pune, a fast-growing industrial city of Maharashtra.

Attractions
The caves are beautifully decorated with many animals and different forms of human life, artistically expressed through the sculptures cut out of rock. The Chatya hall is worth a detailed watch for its architecture and engineering skills. The rooftop is built of Teakwood and amazingly, its still in perfect condition. The pillars are also sculptured, and the one with four lions at the top has been honoured as the national emblem. The expressions of all these sculptures are splendid, and they successfully represent a flourishing era of Buddhism.

There is a stone stupa, magnificent in view, which makes the caves more important both in architectural and tourist point of view. The stupa is placed under an umbrella, to give it a royal look. There are delicate carvings of structures of men, women and elephants, resembling to some of the old Buddhist tales. There are 37 pillars with carvings of affluent men and women, on elephants, yet bowing to the almighty Lord Buddha.

Another intrinsic beauty of these caves is its "hide n seek" with the sunshine. The sunshine coming in through the windows and falls exactly on the shrine, making it a miraculous view and a temple of solemnity.

The roof has been beautifully wood-worked to make the caves a rare example of beauty. Surprisingly, woodwork is not a common feature in Buddhist sculpture and art, and hence it shows effect of other cultures that assimilated with the Buddhist art, to give it a refreshingly new look.

The pillars are also linked to the Ashoka who, had built many structures to spread Buddhism, and are great examples of architecture and art. 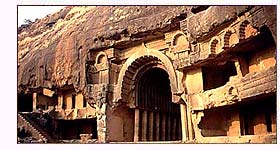 Lonavla :The hill station is an ideal spot to locate nature in its fullest form, and have a break from the busy city life schedules. A constant appeal to the younger generations, the hill station has found its place in many Bollywood movies for its picturesque surroundings. Tagauli, Lonavla and Bhushi lakes are very famous and worth a watch. Besides, Khandala, only 5 km away, is another well admired hill station. The place is important also for the Yoga hospital that is quite reputed in terms of quality.

Pune : Pune is the heart of Maharashtra, a fast growing industrial city of India, yet a traditional and cultural hub. This place has the honour of being the birthplace of great leader Lokamanya Tilak, a freedom fighter. The city is also called cultural capital of Maharashtra, and is a good place to see the Marathi culture and taste the cuisines of Maharashtra. The Pune district is also important in defense point of view, since there are important bases of the Indian air force and the Army, in Pune. It could also serve as a good shopping destination.

How to reach
Air : Pune airport, in Lohegaon, at a distance of 55 km is the nearest and a major airport of Maharashtra.

Rail : There is a local railway station at a distance of 5 km, Malavil, in Bhaja Village, however, Pune is a better known and well connected railway station.

Road : The caves are reachable through the Mumbai Pune road. Buses between Mumbai and Pune go via Karla and hence easily reachable. However, private rented vehicles are also available.