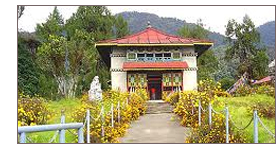 Dubdi Monastery
Established in 1701 by Chogyar Namgyal, Dubdi is the oldest monastery in the state, serving an ideal spot for monks seeking meditational recluse.

Enchey Monastery
Enchey in Gangtok is 200 year old Buddhist monastery and an important seat of the Nyingma order famous for Chaam or religious masked dance.

Pemayangtse Gompa
The ancient gompa of Pemayangtse is one of the oldest monasteries of Sikkim devoted to Nyingma Buddhism. Located near Pelling, the monastery hosts a collection of ancient Buddhist antique idols, scriptures, sculptures of Rinpoches and decorated paintings in various floors.

Do Drul Chorten (Stupa)
Built under the legacy of Nyingma order of Tibetan Buddhism, Do Drul Chorten or Stupa is one of the most important and biggest stupas in Sikkim. Encircled by Chorten Lhakhang and Guru Lhakhang, the stupa boasts of the colossal statues of Guru Rinpoche (Guru Padamsambhava) and 108 prayer wheels.

Tashiding Monastery
Tashiding in western Sikkim is the most sacred and holiest Buddhist monastery in the state. Dedicated to Nyingma sect of Tibetan Buddhism, the site is believed the place where Guru Padmasambhava (Guru Rimpoche) blessed sacred Sikkim in 8th century.