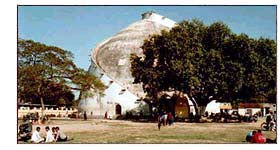 Patna is the capital of Bihar state. Patna is situated on south bank of the river Ganga. Lord Buddha came here when he had to cross the mighty river and the small town that stood on its banks, Pataligram. Patna is the major entry point for pilgrims wishing to travel in the footsteps of the Buddha. It is well connected by air, rail and road to Kolkata, Delhi, Mumbai and Varanasi.

Patna is a cherished destination for the Buddhist Pilgrims, for it's location amidst the surrounding places of Buddhist interest. Bihar, the name of the state has itself derived from the word Vihara meaning monasteries. Moreover, the place has seen a magnificently rich past, both in terms of culture and civilization. It was, in times of Mahabharata, the city of Pataliputra and in the times of rise of Buddhism, the empire of Ashoka. Pataliputra has witnessed its golden days during the reign of Mauryan and Gupta dynasties. Later on, with the preaching of Lord Buddha, the effect of Buddhism started to flourish and became prominent during the reign of Magadha dynasty. The region has been very important as a Buddhist centre of learning right from the beginning of Buddhism.
Ask For Patna Travel Detail
The city has been highly ranked in the travelogues of Megasthenes and Fa -Hien. The descriptions in these ancient travellers' travelogues reveal Patna's architectural grandeur and prosperity. The city was more flourished architecturally by King Ashoka, a great patronage of Buddhism, during 260-239BC. The city is also associated with the great Afghan leader Sher Shah Suri, who ruled over the region during the 16th century and contributed considerably to City-architecture for the city to regain it's lost grandeur.

Location
Located, in the eastern India, Patna is in the northern side of the holy river Ganga and falls in the state of Bihar.

Attractions
Patna offers lots of things for the enthusiasts of ancient art, culture and the religious minded. The Gol -Ghar for a fantastic view of the river Ganga, The museum for Maurya and Gupta period artifacts, The Harmandirji shrine for the Sikh devotees, The Khuda Baksh oriental library for Arabic literature experts, the Jalan museum for Chinese paintings are some of the places not to miss.

Excursions
Nalanda - (Distance-90 km from Patna.) This place is famous for the ancient University of the World, especially the teaching methodologies and the learning system is highly appreciated. The Buddhist monastery found here presents the most exceptionally advanced examples of Buddhist artistry and religious progress. 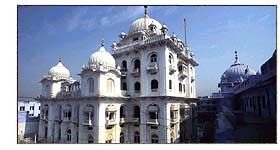 Vaishali - (Distance-55 km from Patna.) Lord Buddha gave last sermon here. This place is renowned for the ancient stupas, the Bawan pokhar temple, the coronation tank and the chaturmukhi Mahadeva.

Rajgir - (Distance-102 km from Patna.) Rajgir was the ancient capital of the Magadha Kingdom. And now, probably the vultures rein, at least, in the Griddhkuta Vultures' Park. The Jain Temples, the Hot springs, the Pippla cave, and the Venuvana are other places to visit.

How to reach
Air - Patna has an airport, well connected to the major cities of India.

Road - The national highway No. 30 runs through Patna, and good motorable roads exist to all major destinations.

Where to stay
Some good options of stay in Patna are as follows.