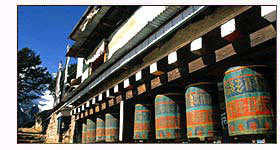 The little village of Piprahwa is a very important Buddhist pilgrimage since Lord Buddha had spent his first twenty-nine years of life in this region. Excavations by archaeological survey of India have revealed the relation of this place to the Kushan period. An excavated stupa bears text that proves the existence of an ancient monastery named Devaputra in this place. Two mounds have also been excavated at only a little distance (1.5 km) from this village which, is considered to be the ruins of King Suddhodhana's palace.

Kapilavastu was the capital of the Shakya kingdom, and Buddha was born to king Shuddhodhana of this clan. He grew up amidst luxury and shunned away from miseries of life. But one day he broke out the luxurious entrapment of his father and set out for a journey to his father's kingdom. The miseries and the care of the people affected spiritual minded Buddha and he decided to find a way out to end these miserable conditions of human life. That led to the birth of one of the world's greatest religions known as Buddhism.

The place is important to visualise the pre meditation, princely days of the Lord who had contributed much to humanity by giving up his own luxury and princely status.

Location :
The city is located 27 km south of Lumbini, in Siddharthnagar district of Uttar Pradesh between Lumbini and Saraswati. The place is now known as Piprahwa. Nepal is not far from the place.

Attractions
The village has a mystic charm, the magic of which can be felt through devoted mind and dedication. However, even for mere archaeological reasons, there are many stupas scattered around the place, built by Ashoka and the Gupta Kings. The symbols left behind by the Sakya dynasty is clearly visible here; moreover, there are relics of Lord Buddha himself.

The city also looks very pristine and could soothe the mind of the traveller due to its mesmerising effects. 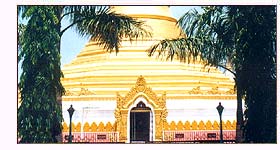 Excursions
Lumbini : Lumbini, Lord Buddha's birthplace, adequately depicts many artistic arrangements of his birth, like the Maya Devi's statue in the temple with same name. Lumbini is also picturesque and very quite place making it the heaven for the tourists.

Sarnath : The four-lion statue, a splendid contribution by Ashoka that lies in this place has been adopted as the national emblem. There are many stupas built by Ashoka and temples, the prominent among them are Mulagandha Kuti Vihar, Choukhandi stupa, Ashok Pillar and Dhameka Stupa.

Kushinagar : One of the four must visits for the Buddhist pilgrims, according to Lord Buddha himself, Kushinagar is the place where Lord Buddha passed away. It was the centre of the Mallas dynasty who ruled over the place, however, only a little has remained in the ruins related to that period. The structures more prominently represent Ashoka's dynasty that had built many structures in this place of Buddha's death.

How to Reach
Air : The best way to reach Kushinagar by air is through Bhairahwa and/or Kathmandu airport. Regular buses ply to Kapilvastu from Kathmandu. However Kapilvastu can also be reached through Varanasi (India), connected through many flights with all major cities of India. 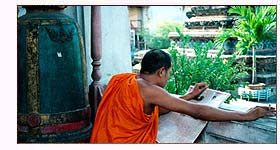 Rail : Siddhartha Nagar, at a distance of 20 km, is the nearest railhead, connected to major destinations in India. However, Gorakhpur could be the choice of most, being a well-known railway junction.

Road : Good motorable road exists which connects Kapilvastu to major destinations in Nepal. Private buses and Taxis are available from all major cities like Varanasi and Lucknow in Uttar Pradesh.

Where to stay
The best way to stay is in Buddhist charity foundations, like the Bharatiya Buddha Mahavihar, or the Sri Lankan temple Dharmashala. One can also stay at The Royal Retreat Heritage Hotel .