Sanchi, in the state of Madhya Pradesh, was built by the Mauryan Emperor Ashoka, the then governor of Ujjaini. His daughter and son, Sanghamitra and Mahindra respectively, were sent to Sri Lanka where they converted the king, queen and the local people to Buddhism.

The massive stupa at Sanchi with its intricately carved toranas (gateways) is noted to be a complete example of the early Buddhist stupa architecture in its extant form. Buddhist site in Sanchi is one of the world heritage sites at Unesco. Bhopal is the nearest airport to Sanchi (46 kms) and is well connected by rail and road with rest of the country.

Sanchi is quite famous for its Stupas, had many a name in the historical times, such as Kakanaya, Kakanava, Kakanadabota etc. The stupas in the place are simple irresistible and showcases the history of Buddhism in India, in a simple yet convincing manner. There is some Stupa built by Ashoka, which are special attractions of this place.
Ask For Sanchi Travel Detail

The serene landscapes and the beautifully erected Buddhist temples add to the beauty of the place. In the large hemispherical domes one can find Buddha's relics.

Location
Sanchi fall sin the State Madhya Pradesh at a distance of 52 km from the state capital Bhopal and 10 km from Vidisha.

Attraction
The Stupas - The huge gateways and the stories encrypted inside the large domes are definitely the most attractive lessons in the Sanchi Chapter of Buddhism. The sculptures and the murals in the Stupa teach the basic values of Buddhism. The presence of Lotus in large number showcases purity amidst sins. There are many other shapes that are exhibited brilliantly in stones, among them human, elephants, jataka tales' characters etc are prominent. There is a way around the Stupa to circumambulate it, which is another attraction of the structure.

The ASI museum - Archaeological Survey of India has a museum in Sanchi housing many antiquities related to Buddhism, especially the Ashokan Pillar, the lion Capital is quite beautiful and attracts every archaeology lover. 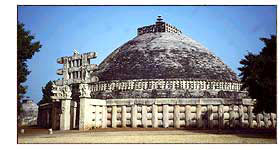 How to reach
Air - Bhopal is the nearest airport at a distance of 46 km.

Rail - Nearest railhead is at Vidisha, 10 km from Sanchi.

Excursion
Vidisha - Just 10 km from Sanchi this place showcases one of the most attractive landscapes around Sanchi. The Heliodoro's Pillar is amust visit, built in 5 AD, it commemorated with the conversion of Taxsila into Hinduism. A museum is also in the city that houses some important artifacts.


Where to stay
Ask For Sanchi Travel Detail