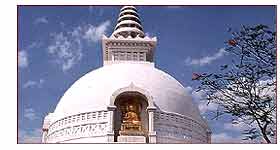 Rajgir has got the name from Raj Griha meaning the abode of the king. The city was the capital of the mighty Magadha Empire during the period of Lord Buddha's lifetime when Patliputra was not formed.

Rajgir is 14 kms from Nalanda. Rajgir is one of the most important tourist places in India. Rajgir has its own very scenic beauty surrounded by five holy hills, the picturesque little town of Rajgir is important for Buddhists as well as Jains. Here the two rock-cut caves were the favourite retreats of the Buddha and it was on this hill that he preached two of his most famous sermons. The nearest airport is in Patna (115 kms) and the railhead is in Bhakhtiyarpur (54 kms). Rajgir is well connected by good roads to Patna, Gaya, Delhi and Kolkata (Calcutta).
Ask For Rajgir Travel Detail

Buddha spent many years in Rajgir and also delivered sermons here. Rajgir is equally important for the Jain as well as Hindu pilgrims, for Lord Mahavira (the founder of Janism) resided here for some time and the place finds its reference in Hindu epic - Mahabharata. The historic sites of Rajgir associated with Buddhism, Jainism and Hinduism attract pilgrims from all over world.

Facts About the City :
State : Bihar, in east of India.
Significance : A Buddhist, Jain and Hindu Pilgrimage Site
Best time to visit - October to March

Tourist Attractions in Rajgir
Shanti Stupa - This is an immence white structure situated on the top of the hill Ratnagiri and is the main Buddhist attraction at Rajgir. This houses four gold statues representing Buddha's birth, enlightenment, teaching and death.

Gridhakuta Hill - Gridhakuta Hill was the favourite place of Lord Buddha, where he delivered many discourses after he attained enlightenment. It was here that he gave two important sutras the Lotus Sutra and the Prajnaparamita.

Ancient Ruins - There are many sites including ruins of the ancient city, caves, and places associated with Ajatasatru and king Bimbisara can be seen here. Here one can see the Ajatasatru's fort built in 5th century BC where the emperor had imprisoned his father. The 1.5-km long outer wall was built by stone blocks.

Saptparni Cave - It was here, where the first Buddhist council was held after Buddha attained Nirvana. Also a Burmese temple, and a modern Japanese temple can be seen here.

How to reach Rajgir 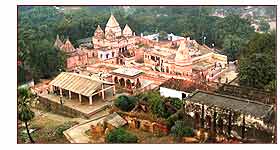 Air - The nearest airport is at Gaya but Patna Airport, in the state capital, is better than Gaya in terms of infrastructure and connections.

Road - Excellent motorable road network connects the town to some of the major cities of Bihar and India. Some of the major road distances are Patana-102 km, Nalanda - 12 km and Gaya - 34km.

Excursions :
Nalanda - It is 15 km away and houses the ruins of the famous ancient Nalanda University founded in 5th century AD. Several monasteries and temples can be seen here.

Swarajpur - Swarajpur lake with its temple is a famous Hindu pilgrim destination which is popular for its Sun Worship festival and is 18 kms from Rajgir.

Pawapuri - It is a great Jain pilgrimage centre, 35 kms from Rajgir where Mahavira the greatest profounder of Jainism attained Mahaprinirvana.