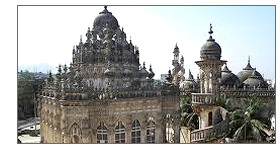 A classic example of old rock engraving, 14 Ashokan Edicts on the way to Girnar Hills belong to 250 BC. Carved on a huge stone, these rock edicts mention the morality and records of royal orders against slaughter, greed and emphasized on the principles of purity of thought, kindness and gratitude.
Ask For Gujarat Tour

Bhavnagar - Talaja Hill
Talaja Hill is endowed with rich Buddhist heritage including 30 ancient rock cut Buddhist caves, and identifiable carvings of Boddhisattvas. The imposing structure is Ebhala Mandapa, a large hall with four octagonal pillars in the front of caves also forms the highlight of this site.

Mehsana - Vadnagar
The recent excavations of Vadnagar have brought into light an ancient Buddhist Vihara dating back to 2nd- 7th century. The monastery had two votive stupas, an open central courtyard around which initially had nine cells. Apart from this, the site yielded the image of Bodhisattva belonging to the ancient period of 3rd-4th century.

Taranga Hills
Around 20 km from away from Vadnagar, Taranga Hills have a profound Buddhist connection. Locally known as Jogida ni Gufa, the recently excavated caves trace the presence of rock cut monastery used by Buddhist monks thousands of years ago.

Also, the hills have Buddhist sculptures carved in stone that resemble the Bodhi Vriksha or Kalpavruksha and other Buddhist motifs. Broken terracotta images of Buddha, four carved images of Dhyani Buddha on a stone plate, stone and brick walls inside rock shelters, etc. were also excavated from the treasure trove here.

Northwest Kutch - Siyot Caves
The east facing sanctum and ambulatory at Siyot Caves also reveal strong Buddhist link. The traces showcase that Siyot Caves were one of the 80 monastic sites for Chinese Pilgrims. 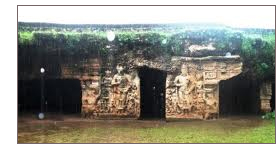 Rajkot - Khambhalida Caves
Rajkot’s Khambhalida hosts three ancient caves belonging to 4th-5th century. The central cave in the complex hosts an imposing Chaitya with a worn out stupa, showcasing strong Buddhist links. The entrance to the cave is bordered by two large sculptures of Bodhisatvas-Padmapani on the right and Vajrapani on the left.

Shamlaji - Dev Ni Mori
Remains of a Buddhist monastery belonging to 3rd-4th century AD have been unearthed from Devni Mori, about two km from Shamlaji. The presence of a stupa and monastery have reconfirmed that during the early centuries of Christian era, there had been a strong presence of Buddhists in Vadnagar. Excavating of the stupa brought to light an inscribed casket which contained relics of Budhha. The inscription clearly mentions that the casket contains bodily relics of Buddha.

Somnath - Sana Caves
The caves at Sana reveal the relics of the Buddhist past in the state. There are 60 Buddhist rock shelter caves carved between 1st century BC and 1st century AD. Believed to be the earliest caves of Western India, these rock shelters have ornate carvings and stupas, rock cut pillows, benches, chaityas, dome and pillared hall.