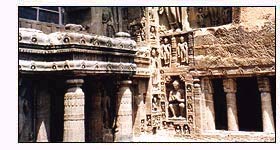 Day 01 : Mumbai Or Delhi - Aurangabad
Transfer to airport to connect flight for Aurangabad. Check into hotel. Proceed for a full day excursion to Ajanta Caves.

Ajanta caves : Nestling in an inner fold of the Sahyardi hills, 100 km from Aurangabad in the shape of a mammoth horse- shoe, are the 30 rock-hewn caves of Ajanta. The Caves date from the 2nd century BC. Evening return to Aurangabad and overnight will be at Aurangabad (Ajanta Caves are closed on all Mondays)

Day 02 : Aurangabad
Breakfast will be at the hotel. Proceed for a visit to the Ellora Caves, Aurangabad Caves and Daulatabad Fort.

Ellora Caves : Impressive in their own right is the rock-hewn temples and monasteries of Ellora that lie just 30 km away from Aurangabad city (Ellora Caves are closed on Tuesdays)
Click Here For More Information/Booking


Aurangabad Caves : The almost forgotten caves of Aurangabad lie just outside the city. Excavated between the 2nd and 6th century AD, they reflect tantric influences in their iconography and architectural designs. In all there are nine caves which are mainly viharas (monasteries).

Daulatabad Fort : Once known as 'Devgiri', this magnificent 12th century fortress stands on a hill just 13 km. from Aurangabad. It was given the name Daulatabad, the 'city of fortune', by Muhammad Tughlaq, Sultan of Delhi. Initially a Yadav stronghold, it passed through the hands of several dynasties in the Deccan. One of the world's best preserved fort of medieval times, surviving virtually unaltered, Daulatabad yet displays the character that made it invincible. 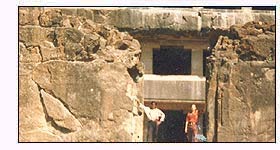 0vernight will be at Aurangabad.

Day 03 : Aurangabad-mumbai Or Delhi
Breakfast will be at hotel. Transfer to airport to connect flight for onward destination.