Buddhism In India & Beyond India - 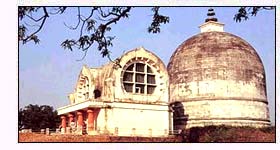 Buddha message spread rapidly, break all caste and class barrier. Buddha message related to our day to day life which is not carrying rituals. It is essentially concerned with all living, suffering being caught in the treadmill of desire and carving. He also spoke of ultimate nature of the existence which is sorrow, and this is the noble truth about sorrow.

Mahaparinirvana
At the age of eighty years the Buddha approached Mahaparinirvana (final extinct) with absolute tranquility. The Buddhist doctrine saw everyone as having an equal chance to achieve salvation. The Buddha ordained men from all walks of life- fisherman, potters, barber and it criticising the Vedic emphasis on sacrifice and rituals. Above all, the enlightened one preached that salvation was in one's own hands, possible in this world, by freeing oneself from desire.

Buddhist Councils
A few months after the Mahaparinirwana a great meeting of monks held, popularly known as the first Buddhist council, took place at Saptaparni caves near Rajagriha. The teaching of the master were codified for the first time and the Vinaya Pitaka and the Sutra Pitaka were compiled. The second council that took place at Vaishali about a hundred years later, where the main point of difference between the orthodox believers and the progressives seems to have been on the question of attainment of Buddhahood, and the third one held at Pataliputra under leadership of The Great Mauryan ruler, Ashoka. In this meeting he decided to spread the Buddhism beyond India and for this purpose he sent his son, Mahendra and daughter Sanghmitra to Srilanka.
Ask for Detail
Ashoka's role in the development of Buddhism
Ashok ruled between 268 to 239 BC, a remarkable emperor known for his fierceness. He himself converted into Buddhism after the bloody victory at the Kalinga war where thousands of innocent victims were killed, this tremendous loss of life proved to be a turning point in his life. He repented and decided for no further of campaigns of conquest. He became an ardent follower of Buddha, and started to popularize the principle of dharma, justice and non-violence which is associated with Buddhism. He took a lot of steps for spreading Buddhism throughout the vast territory.

After Mahaparinirvana of Lord Buddha, different schools of thought took place around Buddhism. As a result intense debates started in the Monastic order. The movement arose out of ideas that had been taking root over along period in a number of sects in southern and northwestern India. These Buddhist called Mahayana, 'the great vehicle' and they described the older one contemptuously as the Hinayana, 'the little vehicle'.

Mahayana or The greater Vehicle
Mahayana philosophy present it as ferryboat that would take humanity across the sea of suffering and rebirth to the shore of Nirvana. Mahayana school focused on Boddhisattva in comparison to Arhat. The arhat to be regarded as a spiritual aristocrat on the path to a purely personal salvation, while Boddhisattive was one who postponed his entry into Nirvana until he could lead all other beings to Nirvana as well.